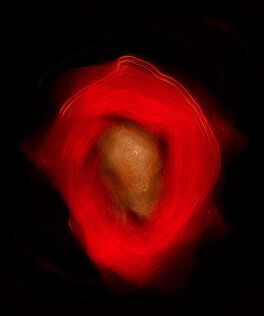 Another Way Of Seeing

Ronan Fox is a Director of Photography filming documentaries and drama for over 30 years.

A note from the photographer:

‘Súil Eile translates directly as Another Eye, but to me, it’s Another Way Of Seeing.

Immersing myself in the visual narrative to tell stories in my documentary and drama work has been a fascinating process of collaboration and creativity for me over the years. I have always tried to film places and things in a way that they might not ordinarily be viewed. I look for an angle of an object that’s not obvious. I frame something like a wall or a gate in the foreground of a landscape to add to the perspective of the vista. I film from an alternate height to where the eye would normally glance at something.

I photograph so that the viewer may perhaps, begin to see things differently.

I’ve a long standing appreciation of many Irish artists work, but for Seán McSweeney in particular, for the earthy, bold and rich colours in his bog landscapes. The shape he affords the richness of a deep blue bog pool to fight with the invasive green and brown of the surrounding soil, for the pool’s rightful space on the canvas fascinates me.

Despite having filmed with many artists in my career, Louis Le Brocquy, Sean Scully, Anne Madden, John Shinnors, Robert Ballagh and others, I myself have never been brave enough to pick up a brush to attempt painting.

So I decided to try using the tool that I am comfortable with, my camera, to create these images of normal, everyday light sources (at night) and show them in a way that they are not ordinarily viewed. All photos were taken where I live on Shandon Drive.’ 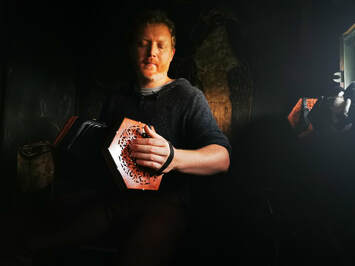 Cormac Begley is embarking on an Irish and European concert tour during April and May to celebrate the release of his second solo album entitled "B". This album is the first solo Bass concertina album of any musical genre and will be available at concerts until its release date.

The event takes place in the Stands of Bohemians Football Club at Dalymount Park. This is an outdoor event so please dress appropriately! The club bar will be open.

You will need to present your e-ticket or printed ticket at the turnstiles to enter.

Cormac is concertina player from west Kerry and he plays 13 concertinas that range from bass to piccolo register. His debut solo album received critical acclaim accumulating nine 5-star reviews. Music from his debut album and his new Bass concertina album are a central feature of the award winning show Mám (directed by Micheal Keegan Dolan) and to Pat Collin's film, 'The Dance'. He plays in a number of projects with musicians Liam O Connor, Caoimhín O Raghallaigh, Martin Hayes and Liam Ó Maonlaí, Rushad Eggleston (cello), Lisa O Neill and Ye Vagabonds. He has recorded with artists including Lankum, Stephen James Smith, Ré, Jack Talty, Ye Vagabonds and Lisa O'Neill. He is the founder of Airt, a residential school in West-Kerry, and the award winning Tunes in the Church live concert series in Galway, and more recently, a new outdoor concert series throughout Ireland from his campervan, the ‘Beauty’.

This album will be available for preorder on April 1st: https://cormacbegley.bandcamp.com/music 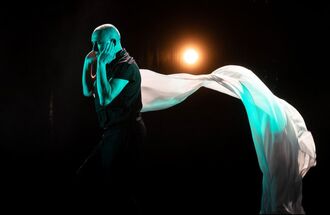 With the voices of Clelia Murphy as the Announcer, Kez Kinevane as the Guard, and Alex Sharpe as  A Stor

From the team that brought you Forgotten, Underneath and the Olivier Award-winning Silent,  Before is a new play with music, set in Clery’s of Dublin, on the very day this iconic department store  shuts - for good. Pontius is inside, trying to choose a gift for his estranged daughter, whom he hasn’t  seen for almost 20 years. He will meet her in an hour. This father’s journey is both beautiful and  strange, from the isolation of his Midlands home, to the madness of O’Connell Street. Some folk are  impossible to buy for…
WINNER: HERALD ARCHANGEL AWARD, Edinburgh Festival Fringe 2019

Before was commissioned by Fishamble and has been in development with the support of the Arts  Council, National Theatre Studio (London), Pavilion Theatre, RTÉ Concert Orchestra, Georganne  Aldrich Heller, Robert Leroy, and The Strollers Touring Network.

Fishamble is an Irish theatre company that is passionate about discovering, developing and  producing new plays of national importance with a global reach, while championing the role  of the playwright.

REVIEWS
'You fight back tears. Of course you do. It’s Kinevane - a rare and truly compelling talent' ★★★★★ The Herald, Scotland
‘Kinevane’s performance works like a spell… a real showstopper, heaven can be found in the most  unlikely places.’ ★★★★ Irish Times
‘...another profoundly affecting tour de force from Kinevane.’
★★★★★ Edinburgh Festivals Magazine
'...an extraordinary tour de force... It is nothing less than a privilege to witness this unique talent in a  show that is utterly singular and steeped in surprise. With the power to make you laugh, cry, think  and feel, Before is fabulous physical theatre.' ★★★★★ The Wee Review
‘extraordinary collaboration... soul-searching, achingly touching gem… [Kinevane is] a treasured  force in Irish theatre.’★★★★ Sunday Times
'Packs a hefty punch... [Kinevane is] a theatrical master craftsman’ ★★★★ The Scotsman
‘one of the most beautiful shows I’ve seen in a long time… shows us true theatre craftmanship is still  alive and well… an absolute joy to watch… strongly recommended.’ ★★★★ ½ Arthur’s Seat
‘a singular pleasure’ ★★★★ Sunday Business Post
‘blows you away… Kinevane really shines… a rare privilege to watch... Well worth seeing’ ★★★★ Musical Theatre Review
'Pat Kinevane is a truly incredible performer, whose ability to reach into the darkest depths of  human emotion and speak out for those marginalised in society is what truly elevates him as a  masterful storyteller and a must see at any opportunity.' ★★★★ TN2 Magazine
‘often hilarious…mind blowingly brilliant…flashes of genius…a truly remarkable performer’  TheArtsReview
‘[a]distinct brand of intimate virtuosity’ Irish Independent
‘a raging plea to see the world in terms beyond black and white’ Sunday Independent
‘Incomparable… with boundless, heroic energy… he sings like a god… superb… Kinevane displays a  complete, perfect mastery of his actor’s instrument… don’t miss this show.' LA Times
Shorter copy of Reviews for restricted word counts
‘It’s Kinevane - a rare and truly compelling talent' ★★★★★ The Herald
‘...another profoundly affecting tour de force from Kinevane.’
★★★★★ Edinburgh Festivals Magazine
‘Kinevane’s performance works like a spell… a real showstopper ★★★★ Irish Times ‘soul-searching, achingly touching gem’ ★★★★ Sunday Times
This multi-award winning coming of age drama is set in the heady world of competitive Irish Dancing. From its superlative debut at the Dublin Fringe Festival in 2016, The Humours of Bandon was hence picked up by Fishamble: The New Play Company and toured extensively both nationally and internationally from 2017-2019 including a highly successful four week sell-out run at the Edinburgh Fringe Festival where it was listed 11 in the top 20 reviewed shows during its first week.Picking up two awards on the way; The Bewley’s Café Theatre’s Little Gem award at the Dublin Fringe Festival and Best Theatre Script at the Irish Writer’s Guild ZeBBie awards in 2017, the play is currently being developed by Treasure Entertainment and Screen Ireland. It is published by Bloomsbury Methuen Drama.

Following a Covid induced two-year hiatus, the show’s writer and performer Margaret Mc Auliffe is back for one night only, to perform this hugely successful show at Phizzfest on Friday 13th May 2022. You do not want to miss this hilarious account of the trials and tribulations of Ireland’s competitive Irish Dance scene…

‘Don’t be afraid of that floor, hammer it!’
​
On the eve of the Irish Open championship, we meet Annie, a 16 year old Dubliner, as she charts us through the various successes and disappointments of her Irish Dancing life. We share her mind numbing commitment and burning desire to win the Irish Open title. Will she win and, if so, in what way?

From the confines of every parochial hall in Ireland, Irish Dancing champions are churned out at a massive rate. Medals and cups build up in drawing rooms and Riverdance swells a national pride, but the public aren’t privy to the blood, sweat and tears that pave the way to the first place podium.

The Humours of Bandon is a coming of age story, full of heart, humour and wisdom, for anyone who had a childhood passion that threatened to overwhelm their life.